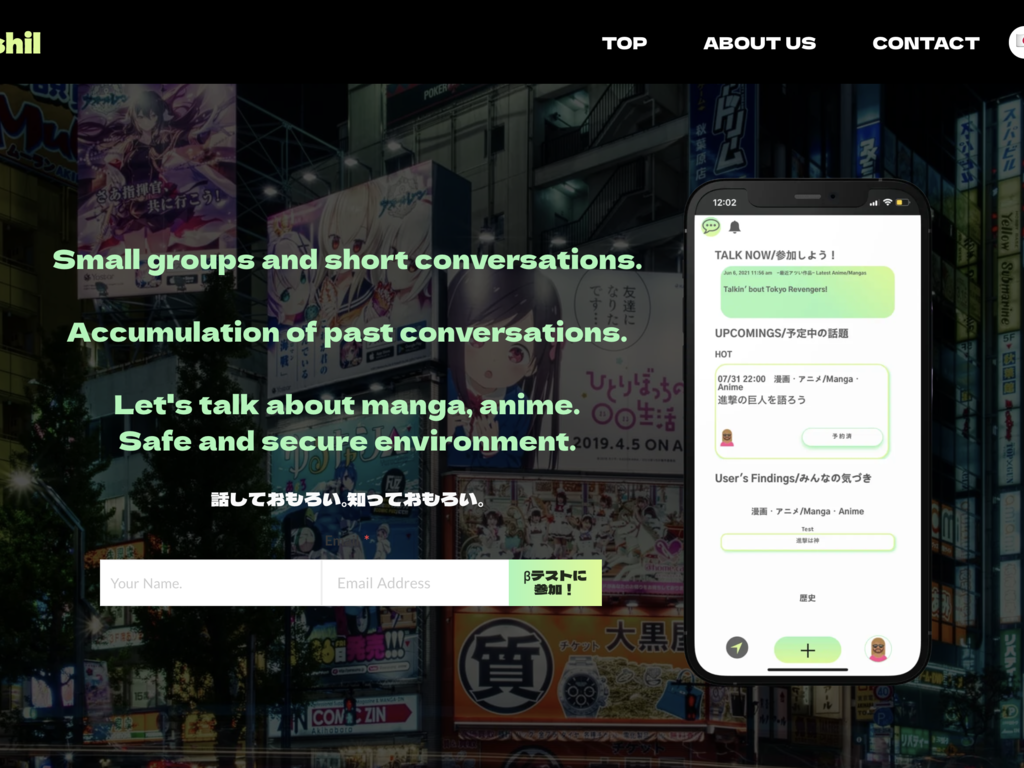 This application was conceived about a year ago. It is aimed at people who enjoy discussing visual artworks such as comics and movies.

It was converted into a PWA using Jasonette and released in early June this year.

At the time of the press release, we were picked up by five domestic media outlets.

It was created with Bubble.io, a no-code tool.

Four people can have a 20-minute conversation. The focus of the design is on talking, not listening.

What does the business do?

It is a closed fan community.

The service is designed to allow fans to share their thoughts on a hot topic after watching it, as anonymous forums such as Reddit can spoil the experience for newcomers and those who are only interested in anime. That's why we concentrated on designing a product that allows a small group of four people to have a conversation in 20 minutes.

In order to create an environment where users who are meeting for the first time can feel at ease while talking, the first five minutes are spent asking ice-breaker questions. At the end of the 20 minutes of conversation time, a vote is taken on which user brought the most relief to the conversation.

Users can earn some kind of reward by accumulating their own conversation points (not yet implemented).

How does your business make money?

The focus is on the commission model.

We have not implemented this at the time of launch. We were considering throwing money at writers/creators and popular speakers. We were also considering a commission model where we would invest in fledgling creators from an early stage, and when they became famous, we would collect a percentage of the revenue from the content they sold.

Why are you selling this business?

Who would this business be perfect for?

Anyone who wants to create a voice community product. Especially those who want to promote art, manga, and culture while attracting enthusiastic users, such as fan communities. You have a strong background in art, film, manga, anime, or any other area that has a passionate fan base.

Since Bubble does not allow for background playback of voice calls, native development on iOS and Android will help the product grow.

For this reason, we recommend using this test version to gather a population of users to grow the product.

Currently, the product is specialized for entertainment such as anime and games, but buyers can modify it to be used for other purposes.

I don't have the skills to take it any further

A successful project with a clear audience, supported by Reddit community.

PartyAdvisor is a marketplace to find the best parties.

Turn your building into a map and game for communication and promotions.

Chat to people nearby.